For the last two months I have been living in Tilburg. It feels like home, as I was born here and went to high school here. Generally, people don’t like Tilburg. It has the same notoriety as Rotterdam, of being an industrial city with hardly any charm. I used to say the same thing; “Tilburg is not a great city if you don’t know it”. Living here once again, however, I was confronted with the strong personality of the city and it’s coherent culture. It seemed that everywhere I went and the things I did were all in some way linked to the city’s cultural heritage; my cultural heritage.

The city of Tilburg is situated in the south of the Netherlands. During the industrialization in the early 19th century, the city expanded greatly because of its growing textile industry; a profession that had been practiced there at least since the middle of the 15th century. The city became an important factor in the fabrication of textile in the Netherlands. Most of the cities’ inhabitants worked in this industry, either at home or in a factory (Commandeur, et al., 1981). After the mechanization, the industry lost its importance for the city and in the 20th century, producing factories vanished from the city entirely. You can still recognize aspects of this history in the city. 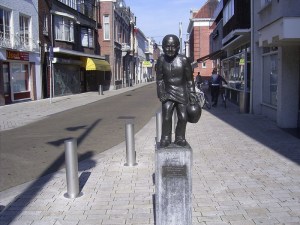 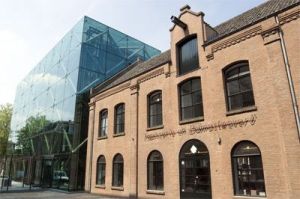 The first picture shows a statue of a ‘kruikenzeiker’, which roughly translates as a jarleaker. People from Tilburg in the 17th century sold their pee to the factories that used it to clean and paint the wool. Households would have a jar in which the whole family would pee. After two centuries, people from Tilburg are still named ‘kruikenzeikers’, as this name came to be related to the Dutch carnival. The whole province knows who you mean by that name.
The second picture shows the Textile Museum of Tilburg. It exhibits the history of textile making and has evolved to a buzzing epicentre of textile manufacturing simultaneously. It is a museum in practice; offering exhibitions and educative programmes on heritage and contemporary design and art. In addition, it is the base of a knowledge-centre, which contains a workplace, laboratory and library where (inter)national designers, architects, artists and promising students are trained (Sauer, 2012) and, additionally, they host changing exhibitions of textile artists.

Next, until, let’s say, two generations ago, everybody in Tilburg used to be a Catholic. This is visible still in the many, many beautiful churches, chapels and convents in the city. Some of these are still in practice, others have been changed into elderly homes or student housing. 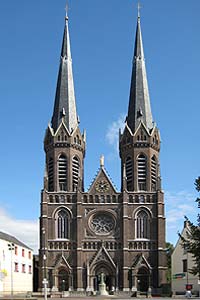 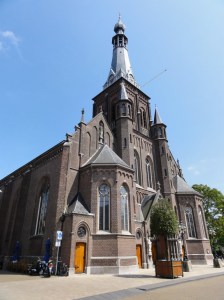 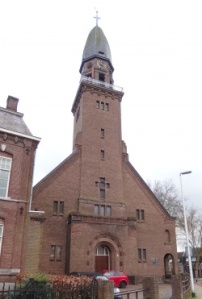 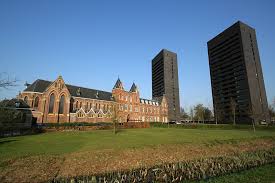 I am sure that you have all had a taste of Abbey beer, and I can tell you with certainty that the best Abbey beer is made at Koningshoeven, on the country not far from Tilburg. Ever tasted La Trappe? This is where it’s made: 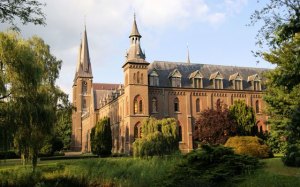 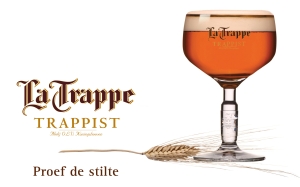 It’s only a 15 minute bikeride from the city centre and definetely worth a visit. Munks still live in the convent and the beer is made in the brewery next to it. You can do tours and even eat beer bitterballen ^^. You can check opening hours at the Koningshoeven website.

This was merely a sneak peak in the nice heritage that Tilburg offers. There are still many things to discover for myself. I recently learned for example, about the characters that Tilburg used to have. Characters such as Rooie Stien and Zotte Joke. A generation ago they were the local fools more or less and everybody knew who they were. I had to do some research on Rooie Stien a while ago, and everybody in Tilburg seemed to have his or her own story on her; fascinating. I found this movie of her on the fun fair. You see her from 2.16 onwards.

It reminded me a lot of a guy that always walks around central station here asking for 50 cents. They call him 50cent, his real name is Jan Schellekes. He does no harm, but is simply always there and thus everybody knows him. I remember he even had his own ‘Hyves’ page (the Dutch variant of Facebook).

Finally, there are some particular aspects such as the Tilburg Fun Fair (Tilburgse Kermis); the largest in Europe I have been told and the Efteling theme park, which is only 10 minutes by car. Both are, in my opinion, very much anchored in the cultural heritage of Tilburg.

I hope I have convinced you somewhat about the charm of Tilburg. Because, yes, it has a lot of charm and it is definetely worth a visit. I could go on and on, so please inform me if you want to know more about Tilburg and it’s cultural heritage. There are some nice books as well such as ‘Ge Waart Mar Arbeider’ on the history of Tilburg, or ‘Goedgetòld – diksjenèèr van de Tilbörgse taol’ on the Tilburg dialect. Both in Dutch. Also, I am very curious about special cultural heritage about your home town, or Tilburg specifically. Let me know!

This august I graduated from the master program Cultural Economics and Entrepreneurhsip on the Erasmus University. The past year has been inspiring. Not only because of the courses of the program, but also because of my entrepreneurial classmates and the research I did for my master thesis. I want to elaborate a little on the latter. 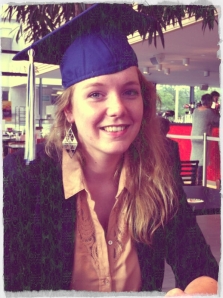 I’ve been active in the cultural sector for over five years now. It is a sector in which money is always a problem. Often, artists do not really care about selling their work. They want to create it. To make something out of nothing, put meaning into it in the most unexpected ways and change our perception in doing so. Money is not important to them and is sometimes even frowned upon. Creating for money is, overall, considered marketing, not art. There is an exhaustive discussion on the necessity of creating art autonomously, in the cultural sector and the academic world, which I will not bother you with. This time. However, in order to create (autonomously), money is often pivotal. In the Netherlands an elaborate funding system came into being from the sixties onwards. The theater sector in specific is highly reliant of this system, as production costs for theater are relatively high and experimental theater turns out not to be the most popular form of culture. It is clear that there is an interesting relation going on here between money and theater (art in general, really). It is highly necessary, yet a topic to avoid.

As the financial crisis hit, the system and its subsidies were being questioned more and more. Back then, it struck met that there were hardly any people in the cultural sector that were actually able to articulate the immense value of art and culture to a society. In the end, the sector is reliant of funds, let’s say for now because of its peculiar not-on-sales-focused functioning. We háve to be able to articulate why art is important. Why, otherwise, would anybody give the sector money? This is why I decided to question this valorization in my master thesis. I wanted to research the value and function of theater venues in Dutch society. It ended up being a valuable research in which I spoke to many people anchored in the Dutch theater sector such as Henk Scholten, Marga Kroodsma, Ronald Klamer and Freek van Duijn amongst others. In short, the research argued that:

I have gotten to know the theater sector from an interesting perspective during the research and have, indeed, formed some ideas on its functioning and how to optimize its valorization. If you are interested in the research, please send me an e-mail.  The thesis reports on the current situation of the Dutch theater sector, a management strategy developed for theater venues and it enables the articulation of the value and function of theater and more generally; art.

Eyes are windows to the soul, so it is said. New Heroes and Het Zuidelijk Toneel, amongst other partners, created eyes to function as windows to the city of Den Bosch. Thus, experiencing OOG may give you an insight to the soul of the city. Or even beyond that? 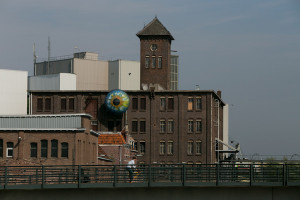 OOG is an experience. You take place in what looks like a rollercoaster seat and get ridden into the eye. What follows is, in my opinion, something that goes beyond an animation. I would recommend to experience OOG yourself, to understand what I mean with that.

I regard this artwork as urban design. The creators label it as a city artwork. It has been some weeks since I experienced OOG. It was only today though that something struck me; this has actually been the first time that I have experienced urban design as an art form. At least in the sense in which you normally enjoy a piece of art, you undergo; co-create it. I could not recall another example of urban design which you can experience in this way. I think and hope we may see such cross-disciplinary works more often in the near future.

You, yourself can now get involved with this project! OOG is actually looking for people to host the artwork during its coming run period. Not only are hosts aloud to experience OOG for free, a special meeting with the creating artist Lucas de Man is organised and hosts receive a small reimbursement for their troubles. This is your chance to get involved with this unique and innovative artform!

For more info on the project go to www.oogdenbosch.nl
To get involved as host, send an e-mail to: host@oogdenbosch.nl